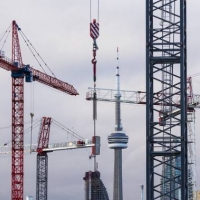 Canada's Condo and Rental Building Boom Is The Biggest Since 1990

Contractors haven't been building condos and rental apartments at this frenzied rate in nearly 30 years.

So says a Bank of Montreal analysis of preliminary housing starts data from Canada Mortgage and Housing Corp. (CMHC) for the month of June.

Construction of multi-family dwellings - which include units in condo and rental buildings - roared last month at an annualized rate of about 186,000 starts, or "the highest level on record going back to 1990," writes BMO senior economist Robert Kavcic.

A housing start is defined as when construction work begins at the site of a new residential development. If the site encompasses 50 units, then that counts as 50 starts, for example.

CMHC's annualized rate is a measure of how many homes would be built in a year if current activity persists. Seasonal factors, such as winter slowdowns, are taken into account.

Rapid multi-family construction largely helped push the rate up 26% compared to May, clocking in at an annualized rate of 245,657 homes, according to CMHC. Single-family activity also increased on a month-over-month basis.

The June boom can at least in part be explained by unusually rough weather in previous months, which delayed work on sites across the country, leading to an influx as warmer weather arrived in June.

"To be fair, there is likely still some catch-up going after a tour winter - recall that February saw one of the weakest readings of cycle, and recent permit activity suggested that there was a backlog of new ground to be broken," Kavcic notes.

But there are other factors supporting the creation of new homes as well.

Homebuilding activity ramped up in all regions CMHC tracks - even in B.C.

Despite a slowdown in demand for housing in Metro Vancouver, where roughly half the province's inhabitants reside, B.C. starts reached an annualized rate of about 62,000 units, up from 55,600 in May.

"Relative to trend, British Columbia is the strongest of the group, which is interesting considering the ongoing correction in prices and depressed resale activity, says Kavcic.

"We've long argued that the decline in that market is, at least for now, largely an asset price phenomenon, especially at the higher end of the market, and that fundamental unit housing demand conditions (ie. demographics, jobs, interest rates) remain solid."