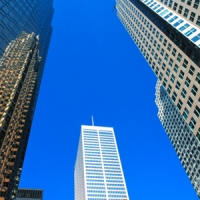 A new report suggests commercial tenants in Toronto will be facing massive rent increases over the next three years, amid rising property values.

Real estate company Jones Lang LaSalle predicts in a study out Wednesday that rents in Toronto could rise as much as 50% over the next three years in response to the tight market for rental accommodation.

At $59.17 per square foot, rents for Class A space in Canada's largest city place puts it in the competitive company of places like New York where similar space was $84.91 per square foot in the first quarter of 2017.

"In all the major markets across Canada, Montreal, Toronto, Vancouver and even Calgary we see stronger demand," said Brett Miller, chief executive of JLL Canada, in an interview. He emphasized the strength is more in downtown core markets as opposed to suburbs and smaller secondary markets.

Toronto rents are expected to climb to $88.76 per square foot over the next three years.

"The current environment is the perfect breeding ground for rental growth, and allows Toronto to catch-up with the major U.S. cities," says the report. "Three favourable factors are influencing rental rates: A limited supply in the market and a conservative and risk averse ownership profile, immigration and the on-going demographic change throughout Canada will result in higher levels of office space demand over the next three to five years and yield preservation tactics as the cost of long-term money begins to climb."

JLL noted that 2016 was a record year for investment with $34.7 billion in commercial property sales, with foreign investors also buying a record number of properties in Toronto and Vancouver - a trend that saw domestic investors bid out of the market.

With commercial developers competing for land which keeps going up in value, Miller says rents have to continue to climb for tenants.

The firm seems limited new supply boosting rental rates in growth Vancouver and Toronto where demand from investors, landlords and tenants is expected to continue. It pointed to new Vancouver projects - Solo District and Containers Phase II - as 85% and 100% pre-leased respectively.

"With only one significant development expected to be delivered this year in downtown Vancouver, rents will push upwards strongly as demand outstrips supply," the report notes.

"There is a reasonable amount of supply," said Miller, about projects in the pipeline in Toronto. "They take a while to get built and the demand is superseding even those deliveries."

Even in Calgary, where vacancy rates are in the 25% range for the city, there is some room for optimism.

"To be clear, we are not suggesting Calgary (rents) will increase by 50% from where it was in 2014 but from where it is today (rents can rise)," says Miller, adding Calgary has had a glut of sublease space that needed to be absorbed. "It's hit bottom and going to be a little more stable. It won't just be tenants (leasing their own space) but landlords leasing space. It's still a bleak story. If the market was $50 (per square foot) before, it's now down at $30."

On the industrial rate front, the real estate company says rents have climbed 20% in the last year as the current inventory is simply too low to meet demand that is increasingly e-commerce related. "The project just keeps changing as we move away from manufacturing to distribution," said Miller. The report notes Montreal has hit a record-low for industrial vacancy.