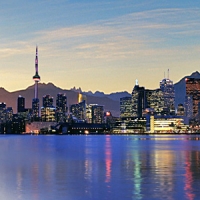 All eyes in Toronto will be on Vancouver after British Columbia introduced new tax measures designed to crack down on housing speculation and relieve a growing affordability crisis in the market.

In its first full budget, B.C.'s NDP government created a new annual tax on investors who own empty properties and pay no income taxes in the province.

"The Toronto market is still adjusting to that round of measures so it's probably a little early for any new moves yet," said Robert Kavcic, senior economist at BMO Capital Markets. "But if we start to see evidence that the market's taking off again and foreign investment starts rising I think B.C.'s speculation tax in particular, is a key measure they'll need to take a closer look at."

The new "speculation tax" will amount to 0.5% of a property's assessed value in 2018 and 2% in following years. The result is a $40,000 annual bill for a house valued at $2-million and a $100,000 levy for a home valued at $5-million. Those prices should be enough to keep at least some non-resident speculators out of the province and to push others to add their properties to Vancouver's choked rental market where vacancies currently stand at less than 1%, Kavcic said.

"The speculation tax is key because it will change the economics of buying and holding real estate in that part of the country," Kavcic said. "It's very aggressive and I think it's warranted."

B.C.'s foreign buyer tax, originally set at 15% on the purchase of a home, was announced a year ahead of Ontario's. While Vancouver detached home prices initially fell by about 7%, they soon returned to pre-tax levels.

Nevertheless, areas that were not beholden to the foreign buyers' tax, such as Vancouver Island and Kelowna have since seen price increases of between 20% and 25%, suggesting prices there soared in the absence of the levy.

However, prices in Metro Vancouver's more affordable condominium market, after briefly flattening out, soon resumed their rapid pace of growth, soaring 28% since the tax was introduced.

Despite the hard hitting moves by the province, fierce demand for this housing type is expected to continue. While the taxes are "a step in the right direction" the B.C. government's budget does little to address the severe supply shortage in the market, said Benjamin Tal, deputy chief economist at CIBC World Markets.

"Both Toronto and Vancouver have a serious supply problem, but in Vancouver it's tougher because they are constrained by geography," said Tal. "But there were some things they could have done, make it easier to bring new land to the market for example."

The B.C. budget states that the government will invest $6-billion in building 114,000 affordable homes over the next decade, while the $54-billion balanced budget will create an extra $2-billion in revenue to fund affordable housing initiatives.

As for the increased rate of the foreign buyer's tax, which will extend beyond Vancouver to include the Fraser Valley, Nanaimo, the Central Okanagan, and the Capital Region District, Tal "doesn't think this is a game changer."

"For some foreign buyers it is just the cost of doing business, but some will likely move capital to other locations such as Ontario. And I think that can open the door to the government in Ontario to raise its taxes."

Though he believes the base of foreign buyers in Canada's market is small and the new taxes introduced in B.C. will have limited impact among their ranks, the measures will likely go some distance to discourage domestic speculation, Tal said.