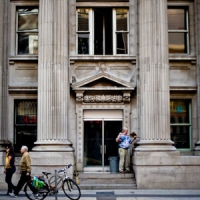 A century-old vacant Toronto bank designed by the architect behind local landmarks Old City Hall and Casa Loma is on the market for a loonie.

For the past 15 years, the E.J. Lennox-designed structure at 205 Yonge Street has stood vacant. That could soon change if the seller's plan to offload the former Bank of Toronto branch pans out.

"It's beautiful inside," says Shawn Abramovitz, the Core Consultants Realty Inc. sales rep who just listed the property. "Me and my business partner went into the building yesterday and it was like going into the Titanic," he tells BuzzBuzzNews.

It's not hard to understand that comparison. Upon walking between Corinthian columns, visitors will find themselves in the main banking hall, which has been finished with fine marble walls and mosaic and terrazzo floors, according to marketing materials.

The attention-grabbing $1 list price for such an opulent building isn't a tease. "Let's not pretend that we can just value this type of property," Abramovitz says he told the seller, who he confirmed was Irish businessman Thomas Farrell. That explains the auction-style price, which may draw bids through the roof.

In fact, Abramovitz thinks the property will break records in terms of per-square-foot selling price. Still, he won't throw any numbers out there. "If I say a number, it might not get the buyer that we want," he explains.

Current owner Farrell was in negotiations with someone interested in running a museum and boutique hotel out of the 17,500 square-foot space, the CBC reported earlier this month. In light of the recent listing, Abramovitz assumes those plans are "on hold" or "the owner didn't come to a conclusion on that negotiation."

Abramovitz says the disused bank's designation under the Ontario Heritage Act "could be a challenge in terms of redeveloping the site, but I really do think it's a unique asset for somebody that really wants to make a splash."

He could see the building being used for a high-end retailer, "maybe a Tiffany's or a Versace." It might be a good fit for nearby Ryerson University's portfolio as well, he suggests. "They could be the right buyers and kind of keep the Toronto heritage alive." Core Consultants Realty Inc. are also courting well-heeled foreign investors.

"There's also a lot of billionaire buyers out there that need to park money. And what's a better return than real estate these days," he laughs.

Bids are being accepted until 5pm on March 23rd.