In Mizrahi's world, "wow" is a cocktail of extraordinary offerings. Think such five-star hotel services as 24/7 concierge, valet and security, matched with exceptional finishes and details that extend from the building's exterior, lobby, and amenities right into the living quarters. Or as he puts it, "from the hardware on the door to the soundproofing on the window, to the paint quality on the drywall, to the home automation system, to the way the lobbies and the hallways and the elevators are kept, to the way the underground parking is finished. It's really creating a 'wow factor' where every detail in the building is noticed."

Judging by the numbers, there's no shortage of buyers for luxury properties in Toronto. Mizrahi has sold out all of his firm's luxury buildings within a year of launching sales - while coveted suites in Toronto's tony Yorkville neighbourhood have skyrocketed from $800 per square foot a few years ago to close to $2,000 per square foot today.

Luxury resales and rentals are hot commodities too. Sales of condo suites prices over $2-million rose 42% in Toronto compared with the same period in 2015, driven mainly by demand from downsizers and the limited inventory of single-family homes. Urbanation reports almost 1,000 units renting for more than $3,000 per month so far this year - 17% higher than for all of 2015 - and 121 units renting for more than $5,000 per month.

"In a lot of cases, when you look at the purchase price of a luxury condo now, it's not that much less than the selling price of the (downsizer's) home," says Shaun Hildebrand, senior vice-president at property analysts Urbanation, which defines luxury as anything above $1,000 per square foot. "These units are quite pricey. The combination of strong financial gains in recent years, obviously huge amounts of home equity have been accumulated, combined with a rapidly growing population of downsizers, particularly in areas such as Rosedale, are contributing to very strong high-end demand - not just for resales but for renting as well."

"There's an overwhelming demand in the city of Toronto right now," says Joseph Feldman, development manager at Camrost-Felcorp. "Over the past 10 years, any condo project you looked at had a ton of shoebox condos. That's the makeup of the majority of condominiums that you see being built today. The spacious large units? Maybe you'll find a couple of penthouses like that, and there's a 50-50 split between builders having large penthouses or carrying out the shoebox condos all the way up. But a full building of large, luxury, spaious units? That's hard to come by. A project isn't considered luxury if it's like everything else.

"Then it's average. A luxury project really needs to have some differentiators, and the spacious nature of these units is integral." That said, Feldman is excited about Camrost-Felcorp's Yorkville Private Estates, situated on the top 15 floors of the 40-storey Cumberland Tower located just south of where the ballroom of the old Four Seasons Hotel used to be. With suites averaging 2,500 square feet and $4-million, as well as the very best in finishes, appliances, hotel-like services and amenities, it's bound to speak to buyers. Says Feldman: "The valet drives everything...it's all about lifestyle in this calibre of product." 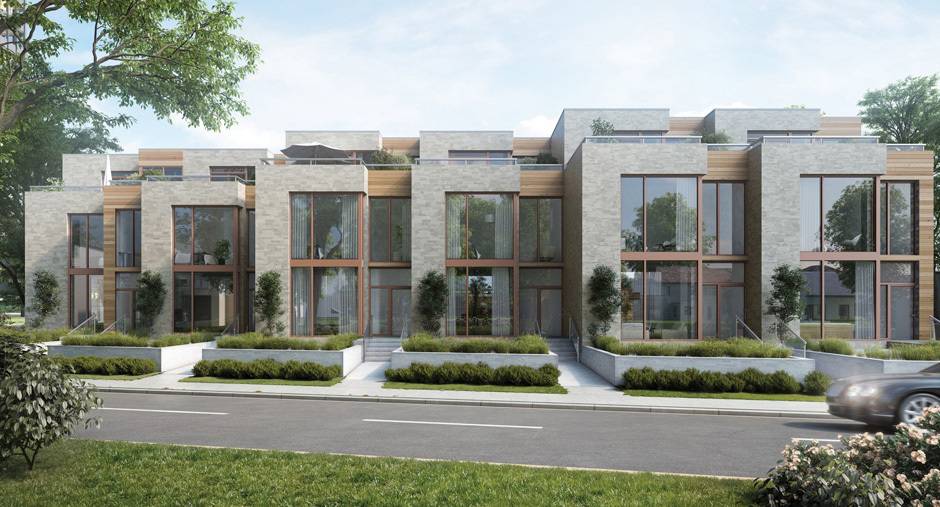 A short drive north at Avenue Road and St. Clair Avenue West, Camrost-Felcorp has a full luxury product underway. Situated on the site of the former Deer Park Church, The Foxbar Suite and Town Homes Collection comprises a 26-storey tower incorporating the front facade and side of the church to preserve its heritage. Condo suites range from 1,150 SF to over 2,000 SF and are priced from $899,900. There will also be six 3-storey townhomes ranging from 2,600 SF to 2,985 SF complete with backyard terraces, full basement and a car garage. Price tag: $2.48-million. Both offerings will have access to amenities at the neighbouring 20,000 SF Imperial Club. It's all part of the developer's 2.9-acre master-planned community that has luxury at its core.

Mizrahi Developments isn't offering preconceived suite sizes at 128 Hazelton Avenue Private Residences. Rather, those wanting in the nine-storey boutique building can buy as much as they want from what Sam Mizrahi calls "ultimate flexibility." He expects suites to average about 3,500 SF, so at $1,750 per square foot that's about $6.1-million ("The fact that you have no limit on how to design your suite is something that's very important, he says). Among the attractions: 10-foot ceilings, Italian marble, custom wine cellars and private garages with elevators to the suite. It's also the last property being developed on Hazelton Avenue due to heritage restrictions, says Mizrahi, meaning all suites will have unobstructed views "and nothing can be built around you."

For some luxury seekers, the real spectacular views are only found in downtown highrises. That's what Menkes Developments is banking on with its Harbour Plaza Penthouse Collection housed on the top two floors of two marquee towers, 66 and 70-storeys respectively. Suites range from 905 to 2,045 SF and start at $2-million. Just a stroll from the financial district, it's not empty nesters buying up the suites but executives in their 40s and 50s looking for a weekday pied-a-terre for themselves and their university-age children.

"If a decade ago you said to someone...that somebody is going to pay $2-million to live in the south end of the financial district, they would say, "That's not where a luxury buyer would be going. They'd be going to Yorkville or a boutique building in the Bridle Path," says Mimi Ng, Menkes' VP of sales and marketing. "The idea of luxury has evolved. There's a broadening of the demographic that's looking for a luxury product. It's not just an older buyer that's retired, that just wants to be in a tony neighbourhood. Now...it's a bit of a younger buyer." Many luxury buyers are either non-residents of Canada or those who have recently moved here. They're older folks who grew up in the culture of condos, rather than their Canadian-born adult kids who are "caught up in the detached-home mentality." They live in the units they buy, because "the economics don't work for investors to buy luxury property" to hold as rentals.

For those swapping backyard for concierge, there's no need to give up on greenery. Stafford Developments' seven-storey Avenue & Park project next door to Pusateri's Fine Foods at Avenue Road near Lawrence Avenue West, for example, is heavily terraced, with some suites boasting outdoor spaces as large 3,000 SF. And being in a North Toronto residential neighbourhood rather than downtown, there are plenty of nearby parks. Buyers can put suites together at $1,000 to $1,400 per square foot. The project launched this month, as did Stafford's 205 luxury freehold-townhome project Downsview Park Towns at Keele Street and Sheppard Avenue; company president Johnathan Goldman says a luxury town product is still "a rarity in the city."

Given all this activity, Toronto is obviously getting noticed. As Mizrahi observes, the city hasn't delved into the high-end luxury market to such an extent until now "because we didn't need to."

But Toronto has become an international city, he says. "We've got immigration from around the world and with that is a very sophisticated homeowner who has lived in Asia and Europe and the Middle East and has seen old-world, timeless architecture. They know what luxury is. They've experienced it in world-class cities around the world. They've now immigrated to Canada, to Toronto, and their expectation is to live in a home that mirrors the high-end luxury cities they're coming from. They have that experience, that knowledge, that touchpoint."