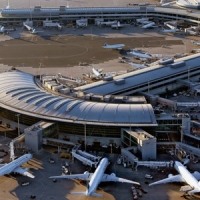 Remember when the TTC was ranked North America's transit system of the year and everyone in Toronto was like "lol what"?

That, but for flying - with less confusion.

Airports Council International, a global trade representative for the world's airport authorities, has named Toronto's Pearson International Airport the best of its kind in North America for 2017. The Montreal-based non-profit has been recognizing and rewarding airports across the globe since 2006 through its annual Airport Service Quality Awards, which are described as "the highest possible accolade for airport operators."

To determine which of the 340 participating airports have the best service, ACI issues a survey measuring the satisfaction of passengers. The survey is said to evaluate quality based on 34 performance indicators, including check-in, security, food and finding one's way around.

Based on 600,000 responses, Pearson was ranked the best airport in North America within the category of "over 40 million passengers per year" - the largest of all airport categories.

Toronto's Billy Bishop Airport also made the list, tying for second place among North American airports with over two million passengers per year.

"This award is a first for Toronto Pearson and comes at a time when the airport has invested in a number of measurable improvements to enhance the customer service experience," reads a press release from the massive Mississauga travel hub.

"Together, the 49,000 people who work at Toronto Pearson - not only for the GTAA, but for the air carriers, the government agencies, the retail establishments, and more - have all helped to achieve this result," said Howard Eng, President and CEO, Greater Toronto Airports Authority, in the release.

"We recognize that we have more work to do to stay ahead of other great North American airports, and compete with other large international airports around the world."