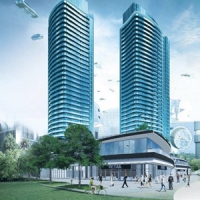 Some 1,100 condo investors were stunned and crushed last week to find out that the pre-construction units they'd already purchased would never actually come to be.

Cosmos Condos, a high-profile residential development near the TTC's new Vaughan Metropolitan Centre Station, was scheduled to be completed by 2020 with move-in dates starting next year.

The complex was being helmed by the Liberty Development Corporation and boasted a total of 396 units across three, 36-storey-tall buildings with "futuristic architecture, ultra modern suites and state-of-the-art amenities."

The project was already sold out, in fact, when Liberty started sending letters to buyers telling them that it had been forced to "cancel all agreements of purchase and sale."

"We have recently learned that because of circumstances beyond our control and Liberty's best intention, our project, Cosmos Condominiums, has been challenged," read the letter to pre-construction buyers.

"At this time, financing for the project on terms satisfactory to the Vendor cannot be arranged."

That vendor, known only on paper as 1945086 Ontario Inc., is now being accused of the ethically shady (but still legal) act of cancelling these condos only to make more money by putting them back on the market at a higher price later.

All buyers have been ensured that their deposits will be returned with interest, but many say that's not enough of return on what in some cases was a huge investment.

Buyer Karan Kundra told City News in an interview that he'd put down $60,000 deposit on a one-bedroom plus den. The total price of the ninth-floor unit (plus a parking space) was $330,000 when he bought it.

Those same units are now going for more than $400,000 according to Kundra.

Hopeful residents who feel burned by the situation have been banding together online in recent days to get the attention of government officials.

A remarkably active Facebook group called Cosmos Condos Terminated - What Now? had more than 275 members as of Monday afternoon.

"A friendly reminder to send a note to Kathleen Wynne before you go to bed tonight," wrote someone in the group on Sunday evening. "Her office cannot possibly ignore 200+ messages about the same thing."

At least one politician has already spoken out against how the cancellation is being handled.

"I am not at all impressed about what has transpired," said Vaughan Mayor Maurizio Bevilacqua to the Vaughan Citizen today.

"While the developer cites financing challenges as the reason, I am much more concerned about the hundreds of people that have purchased a condo where they could live, experience and enjoy life in our community."

This isn't the first time something like this has happened in the GTA, but those affected hope it might be the last.

Members of the Facebook group have started multiple threads about a potential class action lawsuit.