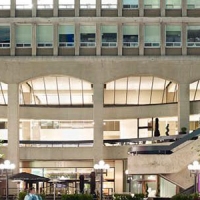 Image courtesty of: Colonnade on Bloor

As Toronto homeowners begin receiving their property tax bills in the mail, the owner of a trendy strip on the city's Mink Mile won't be paying anything at all, CBC Toronto has learned.

The freebie is part of a 66-year-old special arrangement between the city and Victoria University - a college of the University of Toronto - which owns a half-block-long piece of land on Bloor Street West between Bay and Queen's Park Crescent, on which The Colonnade sits.

"We're talking about properties along Bloor Street that have some of the most high-end stores. This is the million-dollar mile of retailers," Coun. Janet Davis (Ward 31 Beaches-East York) told CBC. "Everybody should be paying their fair taxes."

A city document released in late February indicates the property had an assessed value in 2012 of $142-million. The city estimates that under normal circumstances, the university would have had to pay about $12-million in taxes on the property between 2009 and 2015.

"We can't afford to lose that amount of tax revenue," Davis said. "We have to get Victoria University to agree that for those commercial properties they own, they have to collect commercial taxes for the city of Toronto. Those millions of dollars could be spent on programs that serve our most vulnerable, whether it's housing, child care, long term care - those are the services we're desperately short of in the city of Toronto."

Universities in Toronto must pay property tax on lands they own but do not actively use. However, under the provincial Victoria University Act of 1951, the school was given an exemption from that rule, and now leases out its Colonnade property on Bloor to a company called Revenue Properties Company Ltd (RPCL).

Victoria University president William Robins says the school used its tax-exempt status to develop The Colonnade in the early 1960s "in a neighbourhood that was struggling at the time. As a result of these buildings, the City of Toronto has gained millions of dollars in tax revenue that it would not have received if those properties had continued to be used as student residences."

Robin's statement acknowledges that the university "does receive income from its real estate portfolio, 100% of which is used to fund its core education mission, including academic programming and student support." But a statement on the stand-off from a 2016 city staff report reads: "the financial unfairness to the City and to the other public universities in Toronto from Victoria University's broad tax exemption is stark and should be fixed."

The University of Toronto benefits from a similar piece of provincial legislation. However, city documents say that U of T pays compensation to the city voluntarily every year.