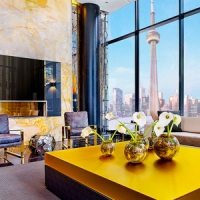 Re-sale home prices in the Toronto region dropped 12.4 percent, or about $110,000, year over year in February. The average price fell to $767,818 from $875,983 for all housing categories, including detached, semi-detached, townhomes and condos.

The number of sales also plunged nearly 35 percent last month compared to February 2017 - to 5,175 transactions from last year's record 7,955 according to the latest statistics from the Toronto Real Estate Board in early March.

But the region-wide averages are actually a mash of two different markets in the Toronto region. As some downtown homes continue to sell over the asking price with multiple offers, including the scorching condo sector, some outlying markets, notably in York Region, are lagging as sellers struggle to adjust their expectations from last year's now-faded feverish activity.

The sluggish start to 2018 is what the real estate board says it predicted after the extraordinary Toronto-area market peak in the first four months of 2017. Last April, prices topped out at an average of $920,791 - 24.5 percent above the previous year.

Sales have since been declining because that month the Ontario government took cooling action by introducing its Fair Housing Policy, including a foreign buyers tax, said Jason Mercer, TREB director of market analysis. Prices have been slower to drop from last year's spike, with the first decline showing up in November, he said. "As we move into the spring and summer months, it's likely that we'll start to see some price increases on a year-over-year basis as well," said Mercer.

"Sometimes when we see sales off like we have since the spring of last year, it masks the fact that we are still up against a supply issue in the Greater Toronto Area, and when we do see a resurgence in demand, which we ultimately will, we're still going to be faced with a pretty short supply in some segments of the market," he said.

That's already evident in the tight condo market where sales declined 31 percent year over year in February, but prices rose 10% to an average of $529,782, said Mercer.

Many condos are drawing multiple offers because new mortgage stress test rules that took effect in January have pushed more buyers into the starter-home price range, said the co-founder of Condos.ca. "It's wild. It's not showing any signs of slowing. I don't have a crystal ball, but this year has gone off to a pretty fast start. Would I like it to be easier for buyers in this market? Absolutely. I would like to see a more balanced market, but I don't see that correction happening any time soon," said the co-founder. "If anything we'll be lucky if we can just get some levelling out."

Most downtown condos are selling over the listed price and those that aren't are units that have been priced aggressively, he said.

More than half of condo sales in Toronto are one-bedroom or one-bedroom plus den units and only 20 percent are bigger than two-bedrooms. Although there may be better value on the re-sale side of the condo market, both pre-construction and re-sale apartments are hot in the city.

One thousand dollars per square foot is the new normal for condos, said a downtown agent, who says he's never seen anything like it in the 14 years he has been selling downtown real estate. He cited one 516 SF unit that was selling for $524,900 - about $1,017 per sq. ft., where offers were being held to position it for multiple bids.

"It's almost like every would-be homebuyer in the city woke up and said, 'I realize I'll never be able to afford a house, I'd better buy something," said the agent.

It's a different story in Newmarket and Aurora where sellers are still lagging buyers in their expectations of what homes will fetch, said Richard Gibb of Century 21. Although open houses are becoming busier as the spring thaw approaches, Gibb said he's not sure the market has bottomed out in his area. "You still are seeing those housing prices based on last year's sales. There definitely is a large number of listings that are way over-priced," he said. There are a lot of homes that would probably sell, but (buyers) know the house is overpriced so they're going to wait," he said. Homes in the area selling for $800,000 or $900,000 are still moving. Houses in the $1-million plus range are sitting longer, said Gibb.

In Newmarket, homes sold for 98 percent of the asking price on average and took 27 days on average to sell. But this time last year, Gibb said, those homes would likely have sold within a week because the agents held off the sale to attract multiple offers - that's if a bully buyer didn't come in and snatch the place up first.