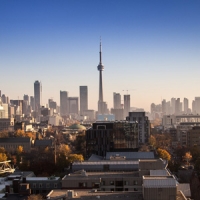 Toronto condo prices predicted to soar ahead of 2018 slowdown

TORONTO CONDO PRICES PREDICTED TO SOAR AHEAD OF 2018 SLOWDOWN

Prices for new condos will continue to rise in coming months, before beginning to slow in the new year, according to a new report released at the beginning of the month.

The index selling price for new GTA condos rose 13% annually to $670 per-square-foot in the 3rd quarter. The rise in prices comes hand-in-hand with a drop in supply. Unsold new condo inventory increased slightly from last quarter to 7,618 units, but remains historically low.

"The pricing numbers we're seeing right now are being driven by a lack of supply," a Toronto Realtor tells BuzzBuzzHome.

Tridel sales and marketing executive senior VP Jim Ritchie agrees, adding that condo prices will continue to remain high as long as buyers are priced out of the low-rise market. "I think these numbers reflect the affordability of condos, compared to other forms," Ritchie tells BuzzBuzzNews. "That combined with robust population growth in the GTA will keep prices high moving into the fourth quarter."

After a rise in prices in the fourth quarter, Urbanation predicts a slowdown in both sales and prices in 2018.

"Market activity for new GTA condos in 2017 has reached an unsustainable pace and a slowdown in sales next year is highly likely, leading inventory levels to move up towards more historically normal levels and causing less upward pressure on pricing," reads the report.

The report also notes that recently introduced mortgage rules, which could affect other areas of the housing market, are unlikely to meaningfully impact the new condo sector, which is expected to remain resilient due to its affordability advantage.

Tridel's Ritchie agrees, adding that the fact that pre-sale condo buyers were already required to qualify at posted mortgage rates will further protect the sector.

"I think the rules will impact the housing market as a whole, but I think for a number of reasons, including the fact that buyers are already qualifying at the posted rates, it will affect pre-construction high-rise less," he says.

"A more cautious approach for both developers and buyers in the coming months will help to ensure the transition to a more sustainable pace of activity," he writes in a statement.