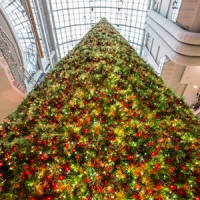 Toronto is getting an epic 100 foot Christmas tree this year

TORONTO IS GETTING AN EPIC 100-FOOT CHRISTMAS TREE THIS YEAR

The holiday spirit is about to bubble up in Toronto. Way up, in fact. Massive Christmas trees will rise across the city this month with the biggest of the bunch coming to the CF Toronto Eaton Centre in mid-November.

As was the case last year, it'll rise a whopping 100 feet in the air, covering three levels of Toronto's downtown mall. This thing is so tall, it's hard to fit it in the frame of the camera.

In celebration of the gigantic tree's arrival in Toronto, the Eaton Centre will host an unveiling ceremony on November 16th, at 6pm that'll feature a performance by Choir! Choir! Choir! and more Instragram snaps than you can fathom.

The following day, a 50-foot version will be officially unveiled at the CF Shops at Don Mills, the mall's first tree of this stature. It too will get the Choir! Choir! Choir! treatment.

Elsewhere around town, the Toronto Christmas Market's 50-foot tree has already gone up in the Distillery District, though it won't be officially lit until the event gets underway November 16th. And later this month, the city's official tree will rise 70 feet at Nathan Phillips Square.