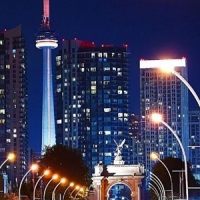 Toronto will have the fastest growing Metropolitan economy in 2017

TORONTO WILL HAVE THE FASTEST GROWING METROPOLITAN ECONOMY IN 2017

Conference Board of Canada

"Although economic growth is forecast to ease in 2017, Toronto will still be the metropolitan growth leader in Canada this year," said Alan Arcand, Associate Director, Centre for Municipal Studies, The Conference Board of Canada. "Hamilton's economy is expected to climb by 2.0% this year, continuing a string of 2% or greater advances that began in 2014. Meanwhile, positive economic momentum in Ottawa will propel growth to 2.3%, thanks to an expanding public sector and a bright tourism outlook as travellers flock to the nation's capital to take part in events and activities for the 150th anniversary of Confederation."

Toronto Toronto's economy had a big start to the year, driven largely by a booming housing market. Indeed, housing starts came in at a seasonally adjusted annual rate of 46,800 units in the first quarter, well above the ten-year average of about 36,000 units. The resale market has been similarly buoyant. However, housing activity is expected to moderate as we move through the rest of the year, partly due to new measures introduced by the Ontario government to cool real estate price growth and improve affordability.

Against this backdrop, it is not surprising that finance, insurance and real estate will be the industry growth leader, although the pact of expansion is expected to slow from 5.2% in 2016 to 3.3% this year. Elsewhere, manufacturing activity is poised to moderate, which will lead to slower but still decent growth in transportation and warehousing. On the other hand, personal services sector activity is on track to accelerate this year, partly thanks to increased tourism numbers stemming from a lower Canadian dollar.

Meanwhile, construction output growth is set to slow from the vigorous pace seen in the past two years, although it will still come in at a solid 2.9%. Housing starts are on track to average 40,800 units in 2017, a 4.5% increase over 2016. Construction activity will also be supported by numerous private non-residential and public infrastructure projects.

Given the bright outlook, Toronto's economy will continue to generate new jobs. Indeed, employment growth is expected to reach 1.9% this year, well above the 1% national average. The robust job market conditions will continue to act as a magnet to newcomers - the metropolitan area's population is expected to grow by 1.8% or 112,000 people this year.

Hamilton Hamilton's economy is forecast to expand at a steady pace of 2.0% in both 2017 and 2018. The area's housing market has also been red hot, caused partly by spillover demand from Toronto and other adjacent areas. As such, finance, insurance and real estate is poised to be one of the better performing industries this year. Although housing starts are expected to ease to about 2,700 units this year, this is in line with the previous ten-year average. But thanks to strength in both non-residential and infrastructure investment, total construction output is on track to advance at a 1.2% clip in 2017.

Two export-oriented industries - manufacturing and tourism - will also support economic growth, as they continue to benefit from a weaker Canadian dollar and a healthy U.S. consumer. Manufacturing output is projected to climb by 1.3% in 2017, while output in the personal services sector, which includes accommodation and food and arts, entertainment and recreation, is forecast to rise by 2.1%.

Meanwhile, after contracting in three of the past five years, the transportation and warehousing sector is expected to be one of this year's bright spots for Hamilton, expanding by 2.1%. The turnaround will be sparked by substantial investments at the Port of Hamilton and by several airlines expanding their flight options out of the John C. Munro Hamilton International Airport.

After adding just 1,400 net new jobs in 2016, employment growth is forecast to accelerate in Hamilton this year, with 2,600 net new jobs on tap. This should push down the metro area's unemployment rate as well as support healthy growth in household consumption.

Ottawa Fuelled by the resumption in hiring in its important public administration sector and strong tourism activity, real GDP growth in Ottawa is forecast to reach 2.3% in 2017, which would be the strongest gain since 2010. Public administration employment, which accounts for one-fifth of total employment, increased at its fastest rate in seven years in 2016, and another increase is in the cards for 2017. As such, sectoral output is expected to rise 2.5% this year.

The personal services industry will see the largest output gain at 4.3% in 2017. This growth will be boosted by tourism-related spending as visits to the capital increase for Canada's 150th birthday celebrations and the city plays host to several major sporting events, including the 105th Grey Cup and an NHL outdoor game. Meanwhile, the business services sector, which includes high-tech oriented activity, is forecast to expand by 2.4% this year, after virtually no change in 2016.

Ottawa's construction sector should benefit from broad-based strength and is headlined by work on a light-rail transit system. At $2.1-billion, Phase 1 of the system is the largest infrastructure project in the city's history. Housing starts are expected to rise slightly to 7,250 units this year, as falling inventories of unsold apartments encourage builders to boost new home construction. All in all, construction output is forecast to advance by 2.0% this year.

The forecast for Ottawa was completed before the spring flooding, so its impact is not factored in this report. It is important to note that damage caused by natural disasters is not captured in GDP, except in the form of lost production or purchases that were disrupted. However, rebuilding does get incorporated in GDP. So, the flooding is likely to generate additional economic activity as public services clean up affected areas and households repair their homes and restock lost furniture, vehicles and other items.