Toronto's House Prices Will Look Like This In 10 Years, If Trends Keep Up

TORONTO'S HOUSE PRICES WILL LOOK LIKE THIS IN 10 YEARS, IF TRENDS KEEP UP

HuffPost Canada has put together projections of house prices in Canada's largest cities, based on the trends seen over the past three years. The prognosis? Things are going to be really, really expensive, if this keeps up.

A single-family home in Toronto will run between $2.26-million and $3.58-million by 2026, by their projections. But the bad news doesn't just affect people who haven't bought yet. Upgrading from a condo to a house in these cities would become a mere fantasty for many in the middle class under these scenarios. 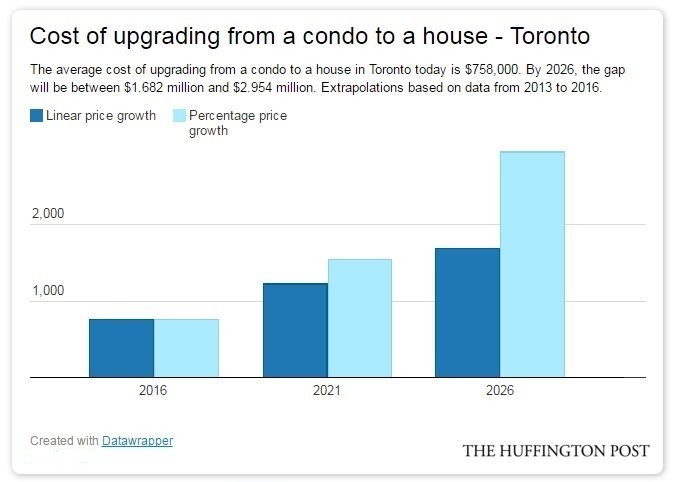 If you think these numbers are insane, you're right. But market pundits have been calling for a crash for the past decade and we have yet to see anything even close to a correction. The fact of the matter remains that with immigration levels being where there are, an exodus of Alberta residents to Ontario, migration from Toronto's suburbs to Toronto's downtown core and a lack of supply for single family detached homes, no end is in sight.

Predicting the cost of real estate is indeed a flawed practice - market conditions change without notice. The forecast for Calgary shows condo prices will be lower there 10 years from now than they are today. But Alberta's oil recession is unlikely to last a decade.

Here's what house prices could look like in Toronto 10-years from now: