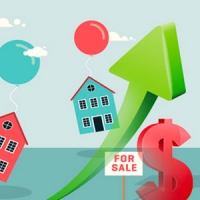 Toronto's housing market hasn't been this unaffordable since the '90s

TORONTO'S HOUSING MARKET HASN'T BEEN THIS UNAFFORDABLE SINCE THE '90s

"As of Q3, the Toronto and Vancouver markets are now the least affordable they've been since the early 1990's," reads the National Bank of Canada's most recent Housing Affordability Monitor, released on November 1st.

Nationwide, the rate of mortgage payment as a percentage of income (MMPI) - a key indicator of housing afffordability that rises as affordability worsens - rose by 2.0%, after rising by 0.5% in Q2. Toronto's MMPI surpassed the national average, shooting up by 2.5%. This marks the 9th quarter in a row of worsening affordability, the longest run in three decades.

National Bank Senior Economist Matthieu Arseneau says that the Bank of Canada's recent rate hikes had a big role to play in the worsening housing affordability in the third quarter.

"What we're seeing right now is that mortgage rates and housing prices are rising in ways that the average income just can't keep up with," Arseneau says.

The overnight rate, which influences mortgages, sat at a historically low 0.5% earlier this year, before the Bank of Canada announced two 25 basis point hikes in July and September. Economists predict further rate hikes in the new year.

So far this year, nationwide house prices have increased by 12.1% and the MMPI has risen 4.7%, while the median household income has only increase by 1.9%.

"At the national level, more than 70% of the deterioration in affordability was due to higher interest rates," reads the report. "In Toronto it was 90%"

Other industry experts are taking note of Toronto's worsening affordability, and the market's susceptibility to rising interest rates.

"Affordability in the GTA has been on a deteriorating trend since 2012 with the pace of deterioration accelerating since 2015," reads RBC's November Canadian Housing Health Check, also released on November 1st. "The Toronto-area market is more sensitive to a substantial rise in interest rates than most markets in Canada due to its high prices."

Arseneau says the new year could hold some relief for Canadian homeowners.

"While we do predict further rate hikes in the new year, we expect housing prices to fall in line with income, which will address the housing affordability for many Canadians," he says.

But when Arseneau says many Canadians, he's referring to those living outside of Toronto and Vancouver.

"We're still quite pessimistic for Vancouver and Toronto, where demand is so high," he says. "While we predict a 10-15% decline in housing prices elsewhere in Canada, it's too soon to say what will happen in the very hot urban markets."