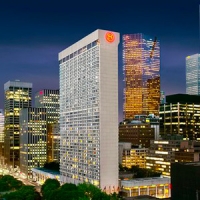 In what is a surprise to probably nobody, it turns out hotels can sell for a ton of money.

The newest mind-blowingly-large sale is the Sheraton Centre Hotel in Toronto. The iconic building was just bought by Brookfield Asset Management for a whopping $335-million.

According to BNN, the sale is a record for hotel sales in Canada. Who would have guessed that a third of a billion dollars would be record-breaking?

The deal is a short, vaguely-worded document that doesn't give away too many details. However, it is known that Marriott, the current owner of the Sheraton, will retain the long-term land lease and management of the hotel.

What was also noticeably revealed is that the lobby will undergo a large renovation. That's good news for everybody, as the busy hub functions almost like a public space and is a great spot to work on the fly if you need a power outlet.

This comes on the heels of a $120-million renovation to the rooms and other areas just recently.

Many of the details are still under wraps, but it'll be exciting to see what changes come to the lobby and other areas as the hotel gets a makeover.