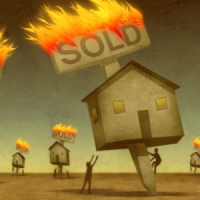 What slowdown? Toronto & Vancouver real estate markets still hot and unaffordable for many

WHAT SLOWDOWN? TORONTO & VANCOUVER REAL ESTATE MARKETS STILL HOT AND UNAFFORDABLE FOR MANY

With recent price declines in Canada's hot real estate markets, there's been talk of a slowdown. But so far, it's hardly something for prospective buyers to get excited about. While prices did drop after the introduction of a foreign buyers tax in Vancouver last year, they're once again surging to new highs.

In Toronto, both prices and sales have taken a dive since the same type of tax came into effect in April. Some had hoped a combination of recent government rule changes making it harder to get a mortgage, higher mortgage rates and the foreign buyers tax might have a lasting effect in cooling the market.

However, Toronto home prices are still up compared to last year and some industry experts predict that, as in Vancouver, the city's recent dip will simply be a blip. And as long as Toronto and Vancouver's real estate markets continue to sizzle, many people will continue to find home ownership out of reach in these cities.

"I just don't get to live here," says Emelia Symington Fedy, who's moving her family from Vancouver to Halifax because she can't afford the high cost of housing in her beloved city. "It feels like my lover has jilted me. I'm heartbroken."

In August 2016, the B.C. government implemented a 15% tax on foreign nationals buying property in Metro Vancouver to help cool skyrocketing house prices. For a time, the tax appeared to be working.

Real estate expert and Queens University professor John Andrew says the price decline was short-lived because the new policy only managed to affect buyer psychology; some prospective buyers sat on the sidelines to see how the tax would play out. "Any time you've got an uncertain market, that's always a temporary effect," says John. And it did prove temporary as skittish buyers soon returned and Vancouver's real estate market rebounded.

"Your demand is still greatly outstripping supply and you've got very strong appetite still from foreign investors who would appear to be just happily paying that 15% tax."

So following the implementation of the foreign buyers tax, Vancouver real estate has become even more out of reach for many people. Symington Fedy, her husband and two children never could afford to buy a home in the city. But they were content, renting the top floor of a house. That's until the family learned that their landlord was considering selling the property. Fedy feared she may never find another affordable rental in Vancouver.

"I just crashed, I just cried, I couldn't believe it," she says. The family scrambled to find a solution and ended up buying a four-bedroom house in Halifax for just $350,000. But that doesn't mean the family's problems are solved. Fedy can still run her pop culture blog and work as a documentary radio freelancer in Halifax. But she's also artistic director of the Chop Theatre in Vancouver, a role she refuses to give up. So she'll have to travel frequently back to Vancouver, a city she loves and never wanted to leave. "I've literally given my heart to Vancouver. And so for it to not be reciprocated and to feel kicked out, broke my heart," she says.

Despite some price declines, there may not be much hope for people priced out of Toronto's real estate market either. "Both the Toronto and Vancouver markets are still absolutely unaffordable to a very high percentage of people that live in those cities," says John Andrew.

In April, the Ontario government also slapped a 15% tax on homes in Toronto and surrounding regions purchased by non-resident foreigners to help cool the red hot market. Just as in Vancouver, prices quickly started to decline, prompting talk of a slowdown.

The sales price for all homes in the Toronto area dropped from an average of $919,449 in April to $746,218 in July - a decrease of 18.8%. However, prices are still up 5% from a year ago. More specifically, detached home prices rose 4.9% and condo prices climbed a startling 23.2% over the year. The total number of sales has dropped dramatically - by 40%. But a big sales drop doesn't necessarily correlate into a big price drop unless sales continue to decline for months.

And some industry experts predict the Toronto downturn will be temporary. That's because, like Vancouver, they believe it's based on psychology with apprehensive buyers waiting to see how the foreign buyers tax announcement shakes down. "You had people standing up there saying, 'Our goal is to cool the market,' and that made a lot of buyers say, 'OK, I'm going to hold on, I'm going to wait."

He predicts the waiting game won't last and when buyers return, prices will tick back up. "I think it's going to be insane," he says about the fall market. Andrew predicts as long as we don't see another rise in interest rates, the Toronto market downturn will subside and prices will remain steady. But if that happens, just in Vancouver, Toronto real estate will remain out of reach for many people, despite policies put in place to help them - policies that might temporarily temper prices but may not have a lasting effect.