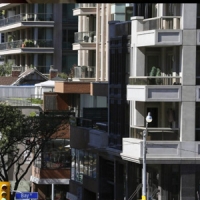 WHERE THE MOST (& LEAST) EXPENSIVE CONDO AREAS ARE ALONG THE SUBWAY

Want a condo but don't want to compromise on TTC access? Consider something in the Danforth area where the price per square foot is substantially lower than buildings on the Yonge-University-Spadina subway.

If you're looking for luxury, get off at Museum where condos in the vicinity average $1,029 per square foot; inventory is limited, but you're close to the ROM, the funky Annex neighbourhood and Yorkville.

Condos.ca has come up with a map illustrating the price per square foot of condos around TTC stations.

It shows that you can buy more for less around Yorkdale, where a square foot of space averages $375. That's because the builders tend to be a little older, says Condos.ca.

The map provides the average cost of a square foot around subway stops from Jan. 1 to May 10th of 2017. The average is based on a radius of about the halfway point from one subway station to the next along the line.

TTC stops average about 800 metres apart but the distance can be more than 1km north of Spadina station toward Sheppard West, formerly known as Downsview station, and as close as 400 to 500 metres apart on the Danforth, said transit spokesman Brad Ross.

Price per square foot is the best measure of what you're getting for your money.

It's not just about average price. Average price doesn't take into account how the size of units have been (historically) trending downwards, although there has been a slight rise in the average size of new units in the last year. It gives you a more accurate sense of how prices are changing.

The Danforth has been undervalued. It hasn't attracted as much development as some other areas of Toronto but mid-rise condos are emerging. The 12-storey Carmelina condos near Danforth and Woodbine Avenue averages $734 per square foot.

The Sheppard subway line also includes some of the lower costs per square foot, according to the map.

The Cost of Condos on the Subway System

There may be buyer opportunities along new transit lines such as the Spadina subway extension to Vaughan Metropolitan Centre, expected to open late this year and along the Eglinton Crosstown LRT, which won't open before the next decade. Those lines are already under construction.

Be warned however, the city has a long, spotty history when it comes to building the transit it talks about.