Who's To Blame For High Home Prices?

WHO'S TO BLAME FOR HIGH HOME PRICES?

The Trudeau government is doin' alright, according to the Organization for Economic Co-operation and Development (OECD). Their decision and action to boost the economy through infrastructure spending is considered to be a wise call. But now the Liberals need to turn their attention to the elephant in the room: the residential housing market.

At least, this is the nice, neat version of the most recent OECD report; a 160-page analysis of how Canada is faring in this current sluggish global economy. OECD applauded our newly elected government for their initiatives to boost economic growth through infrastructure spending. That's good. But overheated pockets within the residential housing market? That's bad.

This isn't the first time analysts tried to warn us of an impending collapse of two potential housing bubbles in Canada. Add to this list: the International Monetary Fund, Fitch Ratings, at least two prior OECD reports, an Economist magazine roundtable, the list goes on.

Problem is housing is a multi-headed beast. Slay one head and the rest just might rise up and react. To appreciate this beast, two Bank of Montreal economists released a report today outlining all the factors that have contributed to our current hot housing market in Toronto and Vancouver (and environs). As the new BMO Capital Markets report states:

Canadian existing homes sales slipped 2.8% in May (seasonally adjusted), leaving activity a still-firm 9.6% above year-ago levels and just down from a record high.

Supply, however, remains extremely tight, with new listings falling 3.2% in the month, or 4.1% in the past year. That left the months' supply of homes available on the market steady at 4.7%, the lowest since January 2010 (ie. when demand was surging out of the recession). That combination continues to push prices higher, especially in the country's two hottest markets.

The average Canadian transaction price was up 13.2% year-over-year in May, while the benchmark price rose 12.5% year-over-year, the strongest clip since 2007.

But, as you are by now well aware, this is entirely a two-city story, with benchmark prices in Vancouver flaring 29.7% year-over-year in the month (including a nosebleed-inducing 27% year-over-year rise in detached homes), while Toronto prices are up 15% year-over-year.

According to BMO Chief Economist, Douglas Porter, and Senior Economist, Robert Kavcic, there are a handful of factors that directly or indirectly impact real estate prices in Toronto and Vancouver.

In an effort to appreciate how each factor impacts housing, Porter and Kavcic examined and rated each factor to assess the impact it had on Canada's residential housing market.

Yes, interest rates play a significant role, but as Porter and Kavcic point out in their report: "record low borrowing costs are the most obvious factor behind lofty home prices, but the fact that the surge in prices is so heavily concentrated in just two cities (and their environs) means that there are other important factors at play as well."

By assessing each factor, Porter and Javcic developed an appreciation for which factor has had the most important on Canada's residential housing trends. 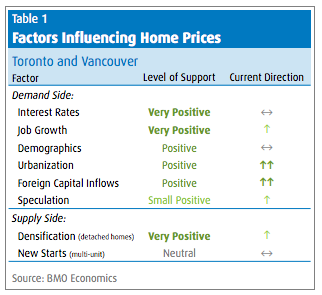 Want to know why housing demand is so high in Vancouver and Toronto? Look at the job stats. According to Porter and Javcic, B.C. and Ontario are "poised to lead the country in economic growth again this year." Their strong economic performance has meant job growth. "These two cities have accounted for all of Canada's net job growth in the past year," write the report authors. While the rest of the country were losing jobs, Toronto and Vancouver added positions. Meaning that these two cities now account for more than 25% of all Canadian jobs - "the highest share in at least 15 years of data," notes the authors. With roughly 250,000 more jobs in these two cities that's a strong marginal boost to housing demand. 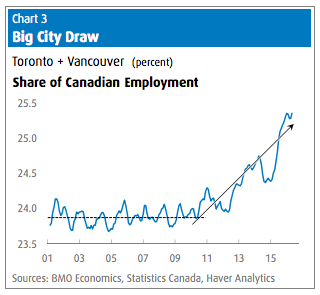 There's one demographic cohort that drives home buying and before you answer, it's not the Baby Boomers, although they do play a role.

Regardless of the year or cohort, the prime home-buying age group are the 25 to 40 year-olds. After a 15-year lull this prime home-buying cohort started to really accelerate their purchases beginning about 10 years ago.

"Quite simply, the millenials have now more than filled the housing demand void that plagued the country and helped suppress home prices through the 1990s/early-2000s," write the report authors.

But what really set the housing market up for such great gains wasn't just the buying habits of family-making millennials, it was the selling habit of Baby Boomers. Over a decade ago there were predictions of falling home prices, as Boomers abandoned their single family detached homes and downsized. But that just didn't happen. So now you have baby-making millenials trying to buy from staying-put Boomers. Less supply plus increased demand means historical housing prices, particularly in Toronto and Vancouver.

Porter and Javcic do offer a light at the end of the tunnel.

These millenial family units are aging, "this factor is probably close to peaking, with population growth in this segment projected to fade gradually by the end of the decade." 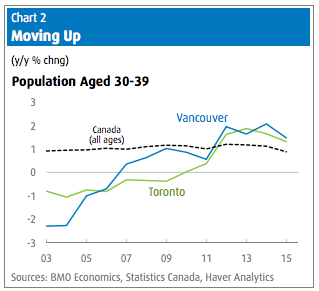 Two cities making up more than a quarter of jobs within Canada means that urbanization plays a role in the housing market prices. "The shifting nature of the domestic economy continues to favour a push into Canada's largest cities," write the report authors. The loss of manufacturing jobs and a weak resource sector has driven younger people into the big cities in search of employment. This has resulted in higher rental rates, as vacancy rates drop which, in turn, impacts housing market demand. 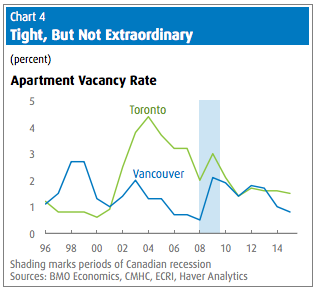 Shocker. Porter and Kavcic are convinced that foreign buyers are a factor in Canada's rising home prices. "There is no doubt that heavy-duty buying from abroad is a major factor behind the price surge in Vancouver and Toronto, and is playing a growing role in Montreal."

They continue: "While many downplay this factor ("it's only x% of the buyers!"), Economics 101 will tell you that the marginal buyer sets the price; and, if you introduce a wave of new buyers on an already tight market, prices will soon reach for the sky as the demand curve shifts even slightly to the right.

And Vancouver's homes haven't been the only recipient of the excess global surplus of cash. "Many asset prices rocketed higher in recent years - bonds, commercial real estate, infrastructure, private equity, residential real estate in Manhattan and London..." to name a few.

To address concerns regarding the country's two hottest markets - Toronto and Vancouver - the Canadian government has acted five times since 2008. The aim: to clamp down on heated housing markets. The most recent attempt was in December 2015 when the Feds raised minimum down payment requirements for homes over $500,000. But Porter and Kavcic rightly argue that these measures have done little to impact foreign money. "All of the proposed measures to tighten borrowing standards in Canada, ie. increased minimum down payments, will simply crowd out the domestic buyer and leave the field wider open for foreign capital inflows."

Because this topic has also become quite heated - with the word racist being thrown about - the report authors also address the distinction between landed immigrants and foreign buyers. Foreign buyers are not residents or Canadian taxpayers; these are buyers looking to park capital. "Landed immigrants are not of particular concern given the economic contributions they bring, but the latter (think vacant homes in tight markets, potential risk of capital flight, etc.) do deserve the attention of policymakers."

Do you know how many flippers are operating in your neighbourhood? Your city? What about the country? Truth is data on real estate developers, speculators and flippers is sparse, but, as the report cites, "there is a creeping sense that, even in just the past 6-to-12 months, speculation is starting to pick up." One way to try and determine the impact of flippers is to examine how many homes have traded in the last 12 months. "In Vancouver, for example, the number of properties trading within 12 months is on the rise - not yet at levels seen at the height of prior booms, but clearly moving in that direction."

The real concern, according to Porter and Kavcic, are condo-speculators. They question whether the year-over-year price increases for condos - currently at 22% in Vancouver is the peak of the curve. "The fact that condo prices in Vancouver, which don't share the same supply constraints as the detached market, are going parabolic suggests that price growth might be starting to reinforce itself." In other words, speculators have now reached the euphoric state of buying: getting into an ever-increasing market, at whatever cost. The good news, for Toronto condo-owners, is that Toronto is a "far milder case" when it comes to condo-speculation.

No discussion about Canada's real estate woes is complete without a look at the supply side. It's a drum the Canadian Home Builders' Association has been beating for quite some time, but we haven't heard until now. In a recent article by Financial Post columnist, Garry Marr, he summed up Federal Finance Minister's acknowledgment of the new construction supply issues:

Suddenly, lack of supply is the #1 reason for high housing prices. But as Kavcic and Porter point out: "it was only a few short years ago that the single biggest supposed sign of Canada's housing bubble was the "rampant overbuilding" in Toronto's condo market. Apparently, we can't quite get the formula right. Overbuilding one year. Under-building the next. Too many condos. Not enough single-family detached homes. "The reality is that overall home building has been relatively healthy in the two big cities, and broadly in line with demographic demand - for example, vacancy rates have held relatively stable at fairly tight levels. Of course, there has been an imbalance between the new supply of condos and detached homes, but that would explain why relative home prices would shift, not why the whole structure of prices would ratchet higher," write Porter and Kavcic.

So that leads us to the issue of land restrictions and densification. "The composition of the housing supply is playing an increasing role in driving detached-home price gains. In a nutshell, while demand for single-detached homes has been rising at a brisk pace, supply of those homes has become almost irresponsive." Turns out the number of detached homes in Vancouver has hardly budged in two decades, and in Toronto, the number of single family detached units completed in 2015 was the lowest since 1979, according to the BMO report. While Vancouver can truly plead a land shortage, it's Toronto's push for densification - a push that dates back decades - that is the reason why we are witnessing the end of single-family homes being built on 50-foot lots in the city.

So, what's a policymaker to do? Realize that there is no one-stop, broadsword fix to this problem. But that doesn't mean ignore the problem. More and more the option to impose a tax is looking good. Whether it's a foreign buyer's tax or a tax on capital gains above a certain threshold or a tax on flipped properties, or a combination of all three. At least if we de-incentivize parking money or making quick money with Canadian real estate then you can chase out most of the marginal buyers and leave the family-builders and homeowners to get on with building communities.