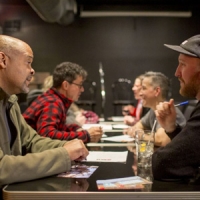 Would you co-own with a total stranger? Priced-out Torontonians turn to real estate speed dating

WOULD YOU CO-OWN WITH A TOTAL STRANGER? PRICED-OUT TORONTONIANS TURN TO REAL ESTATE SPEED DATING

There is a nervous laughter among the gulps of wine, tentatively proffered handshakes and exchanged numbers. But the personalized name tags at this speed-dating event in a Yorkville pub are a clue this isn't a romantic quest.

"I have a big down payment," reads the badge of a woman in a stylish grey business suit.

They are roughly two dozen people, mostly millennials, who have come in search of someone who might be willing to share a roof, but not necessarily a life.

This is speed dating for house hunters. Many people here already have personal partners, and some have already owned homes.

Discouraged by the Toronto region's high home prices and cut-throat bidding wars, they have turned up on a soggy Thursday evening in pursuit of a step up on the city's increasingly unaffordable property ladder.

For some, co-ownership may be their best hope of purchasing a home. But finding the right partner is a complicated legal and financial decision that can also be emotionally fraught.

Abuseif's marriage ended amicably about six months ago. She expects to walk away with about $500,000 from the home she and her husband bought 10 years ago near Dufferin Street and St. Clair Avenue West.

Her half of the home's value won't be enough to buy an equivalent house in the city, and Abuseif isn't keen on a condo.

Her agent has told her that divorce is generally a real estate disaster and many estranged couples continue to live together just to keep their home.

"We're both going with half the (home's) value. It limits us as to what we can do, so it's time to get creative," Abuseif says.

The event is the brainchild of a newly formed company called GoCo, which aims at introducing co-ownership housing arrangements. Although some at the GoCo event say they could probably afford to buy outside the city, most want a downtown home. Few are ready to start looking, though. They are searching for more information and new connections.

"I won't be in a financial position to purchase by myself for a couple more years and I'm afraid I won't be able to keep up with the market," Andrea Campbell says. Her money is tied up in an income property she owns in Ottawa. "I have $400,000 in equity, but I still can't afford to buy a place here," she says.

Her dream is a Toronto triplex where she and her boyfriend could live in one unit and a co-owner could control or reside in another. Ideally, a basement suite would provide income for maintenance.

Campbell, who rents near Broadview station, says she has paid her dues by previously owning a home in the suburbs.

To buy again, she says, "I would have to sell or refinance my investment and then what if I don't win the bidding war?"

Campbell listens to a short panel discussion on co-ownership that GoCo has organized with a lawyer, a mortgage broker and a financial expert. But she heads for the door as the speed-dating part of the evening commences.

The remaining participants sit at tables in spots numbered either 1 or 2. They have been given a list of conversation starter questions. The idea is to have an introductory chat before the bell signals that it's time to move to the next chair and get to know another person.

The first bell goes and the declarations begin. One woman, who already owns an income property, is interested in finding a partner for another; someone else wants help buying a commercial space for music and art; many here are just beginning to explore the idea of co-ownership.