YONGE & BUSY!
Big Deals Are On Tap That Will Reshape Canada's Hottest Retail

It has been called the busiest intersection in the country. The traffic alone is relentless - in a 24-hour span 401,250 subway riders; 51,392 pedestrians; and 31,600 vehicles pass through where Toronto's Yonge and Bloor streets connect.

Now developers have plans to add even more to the mix at the intersection, the cross-section of the city's two subway lines and a growing destination point for tourists from around the world visiting the city.

Three of its four corners are in the process of either changing hands or introducing major new tenants into the retail mix. Sources say Nordstrom Rack is close to a deal that would bring the chain to the intersection's southeast corner.

Across the street on the southwest corner, Apple Inc., after years of searching for streetfront space on the city's famed Mink Mile strip of retail on Bloor Street west of Yonge, is also near a deal.

But an even bigger transaction by dollar value on the north side will see Cumberland Terrace and Two Bloor West purchased by one of the largest and most respected private real estate entities, KingSett Capital.

"It's one of the most important intersections in Canada," said Sam Mizrahi, whose company Mizrahi Developments plans an 80-storey tower on the southwest corner that will come with eight floors of retail space. His company has assembled a site which extends beyond the corner, spending $212-million.

He won't comment on the Apple rumours now swirling around the site, but said retailers have been desperate to get into his space.

"I'd say it's the most coveted retail site in Canada", said Mizrahi. "It's really the nexus of Toronto in terms of density and retail." He predicts the intersection will become the focus of international retail players.

"We are creating uncontaminated retail space," he said in an interview, adding that means no pillars or columns. "The retailer has a magic wand to do whatever they want in the space." 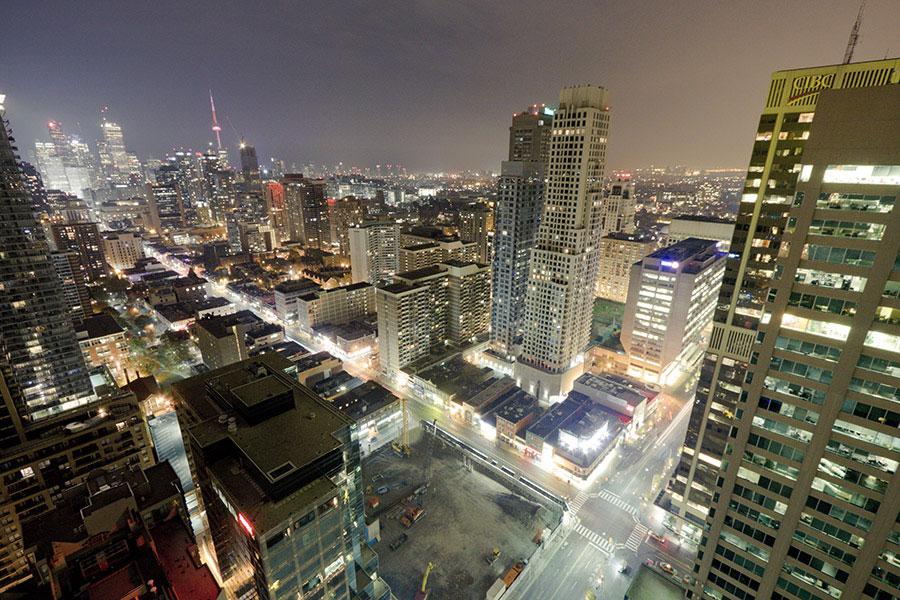 Avi Behar, chief executive of The Behar Group Realty, said Apple has been looking for years for the perfect spot "where they can create a landmark presence in Canada."

Yonge and Bloor fits. It is a focal point in the district, even at the northeast corner of Yorkville, one of the country's most exclusive shopping districts but one in dire need of a facelift.

Phil Traikos, senior vice-president of invesment sales with Cushman & Wakefield, said rents on Bloor Street's Mink Mile on Yorkville's north end top out at close to $350 per square foot per year, the highest in Canada.

Yorkville's transformation has already begun, the seed planted in 2011 when publicly traded real estate giant First Capital Realty Inc. spent $110 million to buy Hazelton Lanes, the luxury mall on the northwest side of the neighbourhood. First Capital is now spending about $100-million upgrading the mall, even blowing up prime retail space so it can build new entrances designed to set the new facility - now called Yorkville Village - apart from what is becoming a very competitive landscape in the area. The company's total investment in Yorkville is $350 million, a decent chunk of its $8 billion in real estate across the country.

First Capital has continued assembling land in Yorkville as the company tries to become the key landlord to the town's glitziest shopping district - a distinctive move away from its malls in areas considered more suburban.

"We started to recognize a number of years ago some of the evolving trends with respect to retail," said Adam Paul, chief executive of First Capital. "There is an urbanization trend where people in every city around the world are starting to migrate into the downtown cores at a more rapid pace."

The path to success in the downtown core requires a lot more planning because of the need to deal with existing tenants and structures and residents who don't always embrace, Paul said. "Urban retail is not cookie cutter at all. You have to be flexible, you have to be creative and you have to have a vision."

Behar said First Capital is setting itself up to be the landlord of Yorkville and with its continued pursuit of land could end up owning a majority of the property in the area. First Capital just this year managed to convince Chanel to move off the Mink Mile and into one of its properties in the heart of Yorkville as the battle for tenants heats up.

The driving force behind the push into the neighbourhood by developers is the critical mass of wealthy people. Paul points to a map showing 5,700 condo units within a kilometre of the area, and that number, based on under or approved construction will jump to 12,000 units.

The housing is hardly cheap. At Yonge and Bloor, the capping off of the Great Gulf Homes 72-storey condo project on the southeast corner just happened this month and units have mostly sold out with a median price of more than $1,000 per square foot.

Christopher Wein, president of Great Gulf Residential, won't comment on rumours that Nordstrom Rack is coming to the space in his tower, but the retailer has indicated it has plans for 15 or more locations in Canada for its discount brand.

"We are in detailed discussions with several retailers and we anticipate announcements in the near future," Wein said about the 100,000 square feet of retail space available. "People come to us. The retail demand for the neighbourhood is quite high."

He said over the next 10 years he expects even more development - his own company has plans for another 64-storey building just north of Yonge and Bloor.

"If you compare us to London, this is our Knightsbridge," said Wein. "Yorkville is such a small pocket. It's not like it can expand, all it can do is densify."