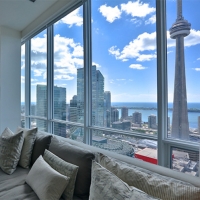 Much ink has already been spilled over the rebound in housing that's underway in some of Canada's largest markets. After a volatile 2018 and an exceptionally brutal winter, home sales began to recover, particularly in the Toronto and Vancouver regions.

The country's all-seeing housing eye, the Canada Mortgage and Housing Corporation (CMHC), recently published it's optimistic 2020-2021 market outlook. The organization famously predicted that 2019 would be one of the worst years for Canadian home sales in the last 10 years, so the shift in tone for the next two years has been striking. Heck it even revised its 2019 forecast to account for a better-than-expected housing performance during the year.

In the 2020-2021 outlook, the CMHC writes that Ontario will lead the country in the continued home sales and prices recovery, pulling up the national averages and offsetting ongoing weak performance in some of the country's other major centres.

The Toronto condo market has played a significant role in the housing recovery observed in markets across the country through the spring and summer months. In the third quarter, the condo market saw an 11.1% rise in sales and a 5.8% increase in prices. While these upward trends are generally anticipated to be sustained through the next year, Toronto's condo market will be particularly sensitive to a number of other factors that are playing out now.

Below we explore three condo market trends that are worth digging into beyond the simple "prices and sales go up or down" market indicators.

1. Toronto's job market will continue to show its strength in 2020

It doesn't take a PhD to understand that as long as Toronto remains Canada's business centre, the city will continue to attract large numbers of new residents assuming the economy stays on a reasonably solid growth trajectory.

"As economic conditions continue to be favourable for job growth in the Greater Toronto Area, people have continued to come to the city for work," said Toronto Real Estate Board President Michael Collins in a media release published earlier this month.

While talk of a global recession has been bubbling up for months now, the fears don't seem to be having much of an impact on the country's job market.

"The big Canadian jobs machine just keeps chugging along, giving no sense to the economy is on the cusp of an imminent downturn," wrote BMO Chief Economist Douglas Porter in early October, following the release of "sturdy" Canadian employment data from September that saw Ontario add 41,000 jobs.

Expect demand for condos to remain high so long as Toronto is a beneficiary of that "big Canadian jobs machine" attracting new residents to the city.

"Home ownership is important to many Canadians, and, as a relatively affordable housing option, condos in the GTA offer prospective buyers the chance to achieve their dreams of owning property," said TREB's Collins.

All this good job growth news is both a blessing and a curse for Toronto's beleaguered renter population who have endured a relentless onslaught of price increases over the years. Job growth has been paired with an increase in average hourly wages, so you'd imagine more jobs with higher pay would benefit renters in the city.

Of course, none of this is happening in isolation, so the burgeoning labour market has also added more residents to the city all competing for the same limited number of rental units in the chronically undersupplied market.

So while the positive job market picture could change on a dime in the face of a deteriorating global economy, only incremental change will likely lift the Toronto rental market out of supply deficit territory.

In a September RBC report, economist Robert Hogue estimated that the number of rental households will increase on an average of 22,200 annually in Toronto between 2018 and 2022. That sounds great from a "the city is booming" perspective, but is a lot less exhilarating when you find out tha the city is building nowehere near enough rental housing to accommodate these numbers.

Investor-owned condos make up a significant potion of the rental supply pool in the city, so you can bet landlords will see plenty of interest in their properties for years to come. And it really could be years - in his report, Hogue said that more than half of the new condo units for the needed rental pool expansion still must be made up. Only major shifts in government policy will move the needle on this issue and Hogue is unconvinced that any level of government is doing enough to expand the rental housing pipeline.

3. The Liberal federal government will expand its support for first-time homebuyers

The now-minority Liberal government first rolled out the First-Time Homebuyers' Incentive earlier in 2019 to a skeptical audience of economists and housing industry observers. Many thought it was less than helpful to homebuyers in Toronto, where the average home price exceeded the maximum mortgage participating homebuyers were permitted to take on through the program.

The Liberals made it a campaign promise to expand the program by increasing the qualifying household income level and maximum mortgage size. If they follow through, the move will likely increase competition within Toronto's condo market since that's where the city's first-time homebuyers typically focus their efforts when taking that first step onto the property ladder.