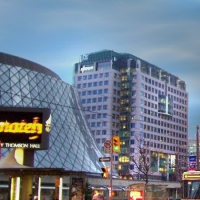 As Fall draws to a close and the new year approaches, plenty of industry experts are making predictions about what 2019 will have in store for the Canadian housing market.

This year saw housing activity take a major plunge, following the introduction of stricter mortgage qualification rules in January. While sales and prices have warmed up since then, there are still several factors that could rein in the market come 2019.

The Toronto housing market will keep warming up.

While the Vancouver housing market has had a particularly rough year, the Toronto market has been posting month-over-month sales and price gains for months. Many experts believe the city has largely adjusted to demand-based policies, including the Ontario government's Fair Housing Plan, which took a serious bite out of the market in the spring of 2017.

In fact, Royal LePage has predicted a 2% price bump for the GTA in the final quarter of 2018, a trend that it says will likely continue in the new year.

"There will likely be continued price growth in the GTA, backed by strong household formation in the area," says Phil Soper, president and CEO of Royal Lepage.

A lack of supply amidst continued strong demand is often cited as the reason for sustained price growth in the region. But while prices should continue to move upwards in 2019, higher interest rates will likely prevent them from reaching the growth levels seen in 2017.

"I think prices in the GTA are headed in a healthier direction, moving into 2019," says Royal LePage. "They will continue to move upwards, but not at the pace we were seeing a year ago."

Key markets will continue to outperform.

The past year has been full of surprise success stories for the housing market - cities that have long been overlooked by Canadian real estate-watchers had banner years, posting record sales and price growth.

Cities like Ottawa and Montreal saw activity surge, as their lower price-points meant that they were able to largely dodge the effects of stricter mortgage rules, while buyers flocked to their strong job markets and relative affordability.

Leading the pack was Hamilton, a market that many experts predict will continue to see strong price growth in 2018, as those unable to afford nearby Toronto look for a more reasonably priced option.

"When you look at the current success of the Hamilton market, it isn't something that's going to go away anytime soon," Hamilton-based realtor Mike Heddle says. "People are looking for a place with job opportunities, where they can afford to live. That's going to be a strength in the new year."

Rising interest rates will put a damper on activity.

The Bank of Canada (BoC) raised the overnight rate to 1.75% last month, in what many industry watchers are calling the beginning of a more aggressive period of interest rate hikes.

The reason? Interest rates have been historically low ever since the 2008 financial crash. Now the BoC has made it clear that it believes Canadians can handle higher rates.

But what does that mean for the country's housing market - well, as interest rates rise, so do mortgage rates. Higher rates, combined with stricter mortgage qualification rules, could keep many would-be buyers on the sidelines in 2019, placing a downward pressure on activity.

In fact, according to Andrew Carbacho-Burgos, an economist with Moody's Analytics, 2019 could be the start of a 5-year period of slower home price growth. He believes the BoC will continue to tighten interest rates through to 2020.

"It is possible that rising interest rates, combined with new rules around mortgage credit, could lead to a decline in sales in the coming year," he says.