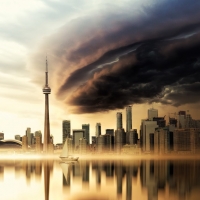 Earlier this month, one of Canada's foremost authorities on housing released its market outlook for 2020-2021. Home sales and prices are expected to regain upward momentum after a couple of challenging years while home building activity will at least see some stability, but not a comparable lift, according to the Canada Mortgage and Housing Corporation (CMHC).

Along with the outlook, the CMHC released three encouraging-looking graphs that plot the course of sales, prices and homebuilding through 2020-2021. Indeed, after some disconcerting downward movement following a banner 2016, the lines are set to reserve course through the next couple of years.

All sounds pretty rosy right? While the CMHC is fairly gung-ho about the early '20s (last century they called them the Roaring Twenties and they say history repeats itself, after all), buried at the end of the report they explore a couple of threats to the market that have the potential to crash the party.

"Amongst the risks to our outlook, we continue to see vulnerabilities related to international trade tensions," writes the CMHC. "Global trade tensions have continued to rise and impact business and investor confidence, tempering economic conditions and increasing the risk of slower economic and housing market activity."

For those who have taken a step back from the whole all-Trump all-the-time 24-hour news cycle (I don't blame you), you will not be surprised to hear that the 18-month US-China trade war is still escalating.

Meanwhile, the news junkies among us will already know that Chilean President Sebastian Piñera pulled the plug on two major international summits set to take place in the country over the next two months in the face of mass civil unrest. One of those summits, the Asia Pacific Economic Cooperation Forum, was likely going to serve as the venue for a trade deal talk between President Trump and Chinese President Xi. All that is to say, the trade tensions that have the CHMC worried are unlikely to be resolved anytime soon. And they may get worse before they get better.

Trade tensions aren't the only risk to the CHMC's housing forecast flagged in its 2020-2021 outlook.

"In addition, high household indebtedness remains a vulnerability because it increases the risk of economic and housing market instability," writes the CMHC. "For example, if interest rates or unemployment were to rise more than expected, heavily indebted households could face greater budgetary constraints, leading to downward pressure on the economy and housing activity."

Ballooning Canadian household debt has long been a source of worry for economists observing the country's financial system and broader economy. While Canadians' debt levels have been gradually easing since 2018 thanks to solid income growth paired with a rollback in borrowing, overall debt-to-disposable income is still considered a scary high figure by some economists.

Echoing the CMHC's recent comment about debt levels, RBC economist Robert Hogue said in September that household debt remains one of the top vulnerabilities to the country's economy.

And, of course, like all things in the global and national economy, the two vulnerabilities are interconnected. If the US-China trade war continues to escalate and sends the global economy into a recession, Canada's central bank will likely have no choice but to cut interest rates to keep the country's economy afloat. Lower interest rates will spur borrowing for big purchases (like houses, for instance), which could lead to Canadians, already saddled with a whole lot of debt obligations, to take on more debt than they can handle. When interest rates inevitabily rise again, it may be too much for indebted Canadian consumers to take.

That's a whole lot of potential financial stress to reckon with at the end of the 2020 market outlook.