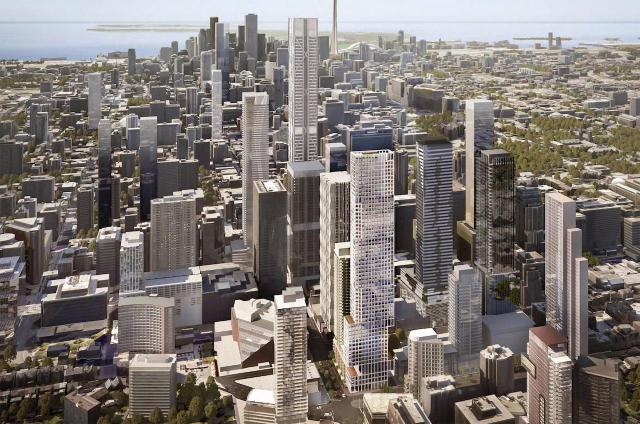 A residential tower has been proposed by the Cityzen Development Group for the southwest corner of Yonge and Scollard Streets in Toronto's tony Bloor-Yorkville area. Designed by the highly regarded Bruce Kuwabara of KPMB Architects, the 59-storey structure with a marble and white concrete-clad exoskeleton is meant as an architectual gateway to the Yorkville area from the north.

1 Scollard is proposed as a slender tower of approximately 15 metres (50 feet) north-south by about 38 metres (124 feet) east-west, rising through shifted volumes to 229.4 metres (752 feet). The building would contain 194 residential suites and 189 spaces in a fully automated underground garage.

A simple grid is continuous across the entire exterior of the building, with punched windows facing out in all directions. Soffits below the overhangs and the solid walls are proposed to have the appearance of burnished metal. At ground level, a loggia along the Scollard Street frontage and a fully glaxed lobby allow penetration into the site, and views from the Yonge Street sidewalk through to Scollard Street and the Frank Stollery Parkette to the north. 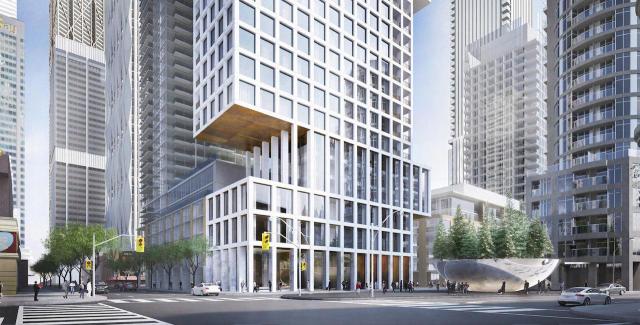 Frank Stollery Parkette was built half a dozen years ago as a result of the redevelopment of the site between Scollard and Davenport on the west side of Yonge Street. At the west end of that property, a wedge-shaped 16-storey condominium building marketed as Lotus by Shiu Pong was completed in 2008, leaving open a space for the Parkette, which was completed two summers later.

The proposal for 1 Scollard suggests the reimagining of the parkette to a design by London, England-based Martha Schwatz Partners. (Martha Schwartz was one of the designers responsible for the well loved Village of Yorkville Park, built a few blocks away in the 1990s.) The design includes dark granite pavers across the entirety of the parkette space, for Scollard Street outside the building, and all of the sidewalks surrounding the building. The parkette would be notable for a polished metal "forest bowl" which would reflect passersby in a similar fashion to Anish Kapoor's popular Cloud Gate in Chicago's Millenium Park. Coniferous trees and ground cover would be planted in the forest bowl, bringing a piece of the Canadian North to the space.

While the parkette proposal is a part of the developer's plans to create a landmark gateway with the building, the City of Toronto's Planning Department has not typically been open to negotiating off-property public realm improvements until all of the planning issues with the building itself have been dealt with. The City is actively engaged with local resident groups to create a more robust laneway system in the Yorkville area to better connect park spaces and retail strips via engaging pedestrian paths. For its part, the 1 Scollard proposal aims to better connect Town Hall Park (seen in the background at right in the image below) to the reimagined Frank Stollery Parkette.

The proposal is just starting its way through Toronto's planning process, with a preliminary planning report and public consultations yet to come.

If you are interested in receiving VIP sales information in regards to this project as it becomes available, please contact: