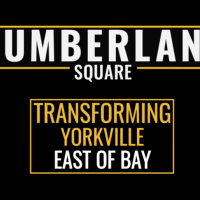 Toronto developer and property manager KingSett Capital has submitted a rezoning application for 2 Bloor Street West through a limited partnership called Bloor CT Acquisition LP jointly held with a partner. The L-shaped site, at the northwest corner of Yonge and Bloor, and following along the south side of Cumberland to Bay, currently features a 1973-built 34-storey office tower and Cumberland Terrace, a 2-storey high (plus below-grade concourse level) shopping arcade.

The site has been subject to a number of redevelopment plans over the last couple of decades. As early as 2001, plans were being hatched to replace the under-performing shopping centre with a larger shopping centre with townhomes above, and a sizeable residential tower of about 30 storeys (image above). That post-modern design proposal by Turner Fleischer Architects was substituted with another one in 2008, this time in a modern style by Bregman + Hamann Architects for the Oxford Property Group, with a yet larger retail base plus two towers this time, 45-storeys mid-block, and 18-storeys at the Yonge Street end.

In mid-2013, that proposal was substituted again for another modern design, this time by architectsAlliance, with plans for 70 and 85-storey towers, the taller one replacing the 34-storey tower at Yonge and Bloor. By the end of that year, another plan surfaced, this time by Dallas-based Humphreys & Partners, a non-winning entry was submitted to the City of Toronto for rezoning, with a mid-block 54-storey residential tower and a 3-storey retail podium (image below).

It was around this time that the City of Toronto's Planning Department, with redevelopment proposals in hand for this property and several others around it, asked the hopeful developers to better co-ordinate their plans to increase separation distances between the proposed towers, and to deliver an improved public realm to the area. Of particular interest to Toronto Planning was a new retail-lined pedestrian mews stretching from Bloor Street to the firehall clock tower on the north side of Yorkville Avenue.

Following the call to co-ordinate, some consolidation of properties began in the area, with Morguard and KingSett emerging as the major players on the block. Morguard, with 50 and 60 Bloor West (the Holt Renfrew Centre and the office tower at the northeast corner of Bay and Bloor), and KingSett, who had bought 2 Bloor West and Cumberland Terrace from Oxford Properties in late 2015, held a joint international design competition to entirely redevelop the Bloor-Bay-Cumberland-Yonge block and part of the block north of Cumberland in a way that would achieve the City's design objectives. The winning entry was never publicly announced after a major leaseholder on the block refused to play ball.

Now, following the collapse of that integrated plan (no image available), redevelopments of individual properties are on the boards again, with 33 Yorkville Avenue furthest along as the parking garage on that site prepares to be demlished for a new Cresford-developed residential and retail project. That project will include a public park and passageway leading south from the Yorkville Firehall clock tower. South of it across from Cumberland Avenue, KingSett's new proposal for the Cumberland Terrace site extends that new public space into a public plaza with towers to both the east and west of it.

The site is a complicated one, as below it runs the Bloor-Danforth subway line in a particularly wide configuration where both the eastbound and westbound tunnels fork west of Yonge station into tracks that leads to both upper and lower Bay Station. The subway tunnel means that there is only space for one below-grade level for the complex, and that supporting walls and columns for anything built above must straddle the tunnel: there is not much remaining width to play with between Cumberland Avenue and Critchley Lane, the service laneway which separates Cumberland Terrace from Holt Renfrew, but it can just be done.

The new proposal, designed by Giannone Petricone Associates, includes towers of 50 and 66 storeys to the west of the public square, and a 69-storey tower to the east. The 34-storey 2 Bloor West tower is proposed to remain as is, other than some alterations at ground level and PATH level to incorporate it into what KingSett is calling Cumberland Square.

At PATH level, Cumberland Square will maintain connections to Bay subway station, 60 Bloor West, and the Holt Renfrew Centre, as well as getting a rebuilt connection to 2 Bloor West. Its east-west corridor would be straightened, with retail being moved to the north side. A tunnel from it under Cumberland Avenue to the former Yorkville parking garage will be maintained as part of the 33 Yorkville redevelopment.

At ground level, the public plaza planned for Cumberland Avenue represents 31% of the total redevelopment site's ground realm. Another parkette planned for Yonge Street immediately north of the 2 Bloor West office tower represents another 3% of the redevelopment site. The City of Toronto typically requires that 10% of a large site be given over as parkland.

Towers to the west of the public plaza would rise to 50 and 66 storeys, located to the west of the block and mid-block respectively. They would rise from a podium with retail at ground level, mostly parking ramp to car elevators on level two, mostly bicycle storage on level three, mostly garage on levels four and five, and office space on levels six through eight. Residents coming home would all ride elevators from ground level or parking levels to the ninth level sky lobby, where indoor amentities would also be found. Elevator banks accessing the two towers would be found on the ninth level as well. The tenth floor of both towers would include indoor amenities that face a rooftop outdoor terrace between the towers. The 50-storey west tower is proposed to rise to approx. 180 metres, while the 66-storey centre tower is proposed to rise approx. 228 metres.

East of the public plaza, the single tower would rise to 69 storeys. The east tower features retail at ground level and the second level - including a large restaurant patio area - the third level is mostly bicycle storage, the fourth level being indoor and outdoor amenities, and the suites starting on the fifth floor. This tower is carved out near ground level in the northwest corner, and then carved again on upper levels in the northeast corner. Two thirds of the way up the tower, amenities are proposed to be vaulted out over the public plaza to the west on the 42nd and 43rd floors, with an outdoor pool atop the cantilever on the 45th floor.

The plaza between the towers is designed by Janet Rosenberg + Studio and includes a succession of pavement treatments, a reflecting pool, seating, a stepped mound, a 'ghost house' structure, and oversized planters. Above it a transparent canopy with integrated lighting is planned to stretch between the towers to the east and west.

Time will tell if the new proposal reflects a plan that will actually be constructed, or if the plan - as is, or modified to a degree - will become the new zoning for the site, only to be modified again once KingSett has a development partner for the buildings.