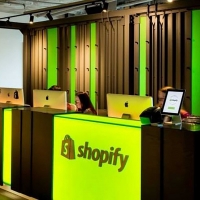 Canadian e-commerce giant Shopify Inc. will announce Friday that the company is making an investment of up to half a billion dollars as the anchor tenant of The Well, a new real estate development in downtown Toronto.

Shopify vice-president and GM of channels, Satish Kanwar, told the Financial Post that the investment represents a statement about the company's commitment to Canada, and how they plan to remain a foundational part of the Toronto tech industry.

Toronto's technology sector is extremely hot right now, with CBRE Group Inc. listing the city as the fastest-growing hub for tech jobs in Canada and the U.S. - beating out Silicon Valley.

Last month, at the Elevate tech conference in Toronto, CEO Tobi Lütke alluded to Shopify's role in driving that trend, as an "anchor" tech company, but Kanwar was even more direct about it.

"It definitely took Shopify to kick things off," he said.

"I don't think any other major technology player can say that they've invested as much as Shopify has into the success of the Toronto ecosystem in that same timeframe."

Shopify is headquartered in Ottawa, but has offices in Montreal, Waterloo and Toronto, as well as international operations in San Francisco, Germany and Lithuania.

Shopify's core business is providing e-commerce services for online merchants, but in recent years it's been expanding to provide essentially a retail dashboard for merchants, supporting shipping, customer service, advertising and other services.

This year the company has also been making a major international push, and expanding into offering services to brick-and-mortar retailers so they can provide services to merchants for both online and offline transactions.

As the company's revenues continue to increase at double-digit rates, Shopify has also been growing its footprint across Canadian cities.

Currently in Toronto they have three offices, but early next year they will move into a 178,000 square foot space at 620 King Street West. But beyond that, Shopify is also planning to become the anchor tenant at The Well, a 7-building development project at Spadina Avenue and Front Street, just a few blocks from the King Street location.

" I don't think any other major technology player can say they've invested as much as Shopify has into the success of the Toronto ecosystem in that same timeframe," says the VP of Shopify.

Starting in 2022, the company will occupy 254,000 SF of office space in The Well, valuing the investment at "up to $500-million" according to a company blog post.

This is not just about office space, Kanwar said: It's also about making a statement about the company's place in the Canadian tech world.

"You can definitely look forward to seeing that bright Shopify logo in the sky on your way into the city," he said.

"What we're doing is putting up the logos to show that there's a technology sector here, and it's here to stay."

Shopify also hosted Unite, its annual partner conference, in Toronto for the first time this year, and plans to hold the conference in the city again in 2019. Previously it was held in San Francisco.

And Shopify recently announced a partnership with York University in Toronto on DevDegree, a hands-on computer science program in the GTA.

Kanwar said he hopes this will draw more attention and tech talent to Canada.

"Concentration of ideas, people, technology and companies is a really valuable thing, and for us, being in the heart of the city, we're investing in increasing that concentration and expanding the creative core of Toronto into the King West neighbourhood," he said.

"We've used all of our spaces as open doors to the community to really facilitate all the density and conversation going on, and there's going to be some absolutely beautiful indoor and outdoor spaces - both at 620 King and at The Well - that we'll use to enable the community and continue to make Shopify a platform for that."