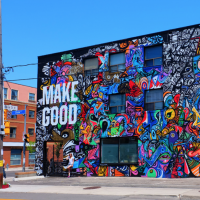 It would be easy to mistake the lobby of the One o One condos in midtown Toronto for a nightclub or graffiti-splashed alley.

Instead of the muted colours and cookie-cutter designs that fill many condo buildings, developer Camrost Felcorp hired Toronto artist Anthony Ricciardi to create seven murals splattered with bright paint and a rainbow of drip marks.

The flashy pieces put the building in a growing group of condo complexes whose hallways, lobbies and outdoor grounds are being emblazoned with massive murals, ornate sculptures or dozens of commissioned art pieces or custom photographs.

Among the installations that have cropped up outside Toronto condos in recent years are a set of tall jagged red posts, a blue tangled rubber band-like sculpture and a handful of white whirlpool installations.

Real estate veterans say such art is an attempt by developers to bring a community feel to shared spaces, but also a bid to attract buyers. Large installations are popping up at an increasing rate, they say, because many developers are realizing the benefits after the city started encouraging buildings to allocate a minimum of one percent of every project's construction costs on public art.

Ricciardi, a corporate finance worker in the real estate industry who only recently decided to pursue his art full-time, said so far developers have been a boom for business.

"In the next two years I have four major projects with developers and they will all include sculptural and interior work," he said. "Developers have been doing this forever, but I don't think enough artists or people know about it."

Heela Omarkhail, senior manager of strategic initiatives at developer the Daniels Corp., agreed, saying her company has been attempting to raise awareness of art in the condo world by collaborating with local artists, especially those early in their careers.

Daniels turned to such artists for the two-tower, One Park Place development in Toronto's downtown Regent Park neighbourhood. In the north tower alone, it commissioned more than 25 pieces of local art, including four sculpture installations, that filled lobbies, hallways, amenity spaces, the party room and even change rooms.

In another of the company's Regent Park buildings, Omarkhail said Daniels hung in the lobby a quilt called Regent Park: A Love Poem - a nod to the fact that it was patched together by locals who wanted to be part of the community's revitalization.

To highlight such pieces, Daniels often keeps the art behind a black sheath for weeks during move-in before unveiling it at an open-house night, where artists mingle with residents.

It's even taken art to the next level by partnering with Artscape, a non-profit organization, to put together a musical production starring theatre stars and Regent Park locals.

It is "hard to say" whether the production or condo art convinces buyers to purchase a property, but Omarkhail figures it at least "enhances the relationship between the buyer and the building because...every art piece or plaque has a story."

"Their sense of home isn't the four walls of their unit," she said. "It extends beyond into those common spaces and really changes the feeling when you arrive in that building."

David Moos, an art consultant for Camrost Felcorp and a former curator at the Art Gallery of Ontario, said in the development realm he is seeing a "widespread consciousness" around the value of art that includes both high-end, fine art and low-end pieces he calls "decorative."

The average person won't instantly see and know how acclaimed a piece of fine art is just by looking at it, but even having art in a condo building could contribute to how world-class the city it is in is perceived to be, he said.

"Some developers take pride in propelling Toronto forward and have realized the role that fine art can play and want to participate in enhancing the urban environment in the most ambitious, sophisticated and impactful way," he said.

Toronto deserves the best, most original and inspiring art and developers can participate in making that happen."