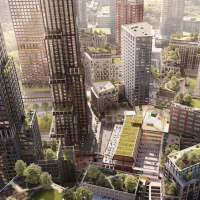 Toronto's old Mr. Christie factory is transforming into a condo and entertainment complex

If you grew up anywhere on Toronto's west side, you'll likely remember the sprawling Mr. Christie factory and outlet store that abutted south Etobicoke's waterfront and produced the world's favourite cookie for more than 60 years. (You'll at least be able to recognize its iconic water tower.)

When demolition of the Lakeshore Boulevard site began in 2017, there was talk of a mega development taking the factory's place, slated to include a transit hub, retail space, restaurants, and residences (ie. condos).

Though local politicians bristled at the idea, it seems that the project is moving forward, as an entire plan with new details about the proposed development has now emerged.

First Capital Realty has submitted to the city an official plan application for the location, which it purchased in 2016. The site was rezoned to a mixed-use area earlier this year.

The plan proposes around 550,000 square metres of residential space (7,500 condo and rental units) and nearly 100,000 metres of commercial, retail, entertainment and restaurant space over the 11 hectare lot.

There are also plans for a 20,200 square metre hotel, and a transit hub that will include a GO station and "significant investment in road infrastructure." The community will be a mix of 15 mid-rise and tall buildings, as well as outdoor spaces.

First Capital, which has been behind a slew of other proposed and completed projects in the city, cites a 65% growth in the Humber Bay Shores neighbourhood around the factory since 2011 - along with a high average income - to back up the proposal.

Given the typical responses to new condo communites, as well some confronting realities of condo dwelling in the city, we'll have to wait and see what Toronto residents think of the venture.